Some history of Street Dream Creations 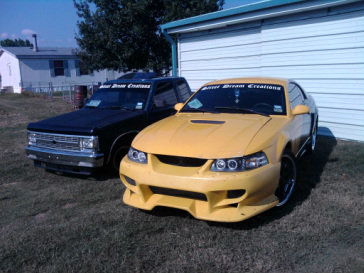 Where did Street Dream Creations start? Our business actually began as a chapter of a car club that originated in Florida. It was turned over to Jarlen Maddon and Dalton Duncan in late 2009. For a year we recruited members, attended shows, and worked on our rides until the club began to disperse for various reasons.

From early ages we both started developing skills in our respective areas of expertise: Jarlen learning suspension and motor work from the dirt-track scene and Dalton practicing airbrushing on anything he could find. We began implementing these skills on our own vehicles, doing the trial-and-error thing until we got it right.

We had tossed around the idea of owning a shop but tended to shy away from the risk involved with quitting our steady jobs to venture into the world of owning a business. Jarlen was content with his job as an electrician in the plants and Dalton was happy being a painter helper in an existing body-shop

After working in a production body-shop in Houston and seeing the quality of work  deteriorate, Dalton quit the job on a whim and, after consulting with Jarlen, decided to open a shop under the same name as our past car club. We had no paint-booth, zero customer prospects, and no idea of business strategy, but somehow made it work. For nearly a year we painted friends' and family members' vehicles in a "wedding tent" set up inside our shop and slowly began to develop a customer-base. We later acquired a "real" spray-booth to do the "autobody" work in.

While SDC was, from the beginning, both a suspension and body shop, only the body-shop was a full-time operation. The Metal-shop was ran by Jarlen but only during evenings and weekends, which made for slow progress on projects and a lot of frustration. Finally Jarlen was granted the opportunity to work full-time in the shop and get the "metalworx" side of the business in full-swing.

SDC is growing at an exponential rate and its taking off faster than we could have ever dreamed. We're still small but we have so much work that we've already outgrown our facilities and staff, including multiple full and part-time employees. Sometimes it can be incredibly stressful owning a business but at the end of the day we wouldn't have it any other way. We're doing what we love in this shop, in the town that we grew up in.

We have had so much help and support from a few special people so we'd like to give a huge thanks to: Jerry Hitchcock, Jean Maddon, Jeorge Hitchcock, Dustin Duncan, and Deana Duncan as well as numerous others - you know who you are. Without the patience, financial support, and advice from these people, SDC would have never even left the ground and would have vanished along with that car-club that started it all.